Aquariums in Japan have voted to stop buying live dolphins from the town of Taiji, where the annual slaughter of hundreds of cetaceans has drawn widespread condemnation, after being threatened with expulsion from the world’s leading zoo organisation. 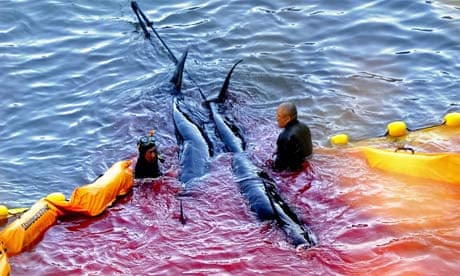 The decision comes weeks after Waza suspended its Japanese members and threatened them with expulsionunless they ended their “unethical” association with the town.

Taiji, in Wakayama prefecture on the Pacific coast, gained notoriety in the Oscar-winning 2009 documentary The Cove, which showed fishermen herding pods of dolphins into shallow water before killing them with knives.

Most of the animals captured during the drive hunts are butchered for their meat, but some are sold to aquariums and sea parks in Japanand overseas.

A majority of the 89 zoos and 63 aquariums belonging to Jaza voted to remain in the global zoo organisation, Japanese media reported.

Voting to retain their commercial ties to Taiji would have led to expulsion and threatened their ability to acquire rare animal species from zoos and aquariums overseas through a global database.

Swiss-based Waza suspended its Japanese members on 22 April after they ignored requests to stop acquiring Taiji dolphins, almost all of them bottlenoses.

The suspension came soon after the Guardian revealed that Waza had been targeted in a court actionlaunched by Australia for Dolphins.The group accused it of being complicit in the infamous hunts by failing to take decisive action against Japanese aquariums. 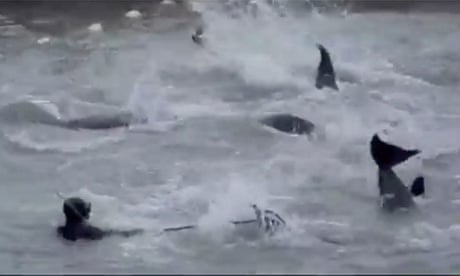 “This momentous decision marks the beginning of the end for dolphin hunting in Japan. The capture of live dolphins, which sell for up to $100,000, is the motivation for the brutal dolphin hunts in Taiji. This decision, which stops Japanese aquariums demanding more Taiji dolphins, is a huge blow to the hunts.

“Jaza aquariums provide up to 40% of total demand for live dolphins from Taiji. So, as of today, the market for Taiji dolphins could be nearly cut in half. Without demand, the hunts won’t continue. It is the first major step towards ending the Taiji dolphin hunts once and for all.”

Lucas said the group would continue its legal action against Waza because other members of the organisation continue to buy dolphins from Taiji and other inhumane hunts. At least 18 of the 33 aquariums in Japan that keep dolphins obtained the animals from drive hunts, according to the Yomiuri Shimbun.

Jaza officials said they would concentrate on expanding domestic breeding programmes in an attempt to make up for the expected shortfall in the supply of dolphins, a huge attraction at the country’s many aquariums and sea parks.

Before the vote, the governor of Wakayama prefecture, Yoshinobu Nisaka, said the threat of expulsion amounted to “bullying from all over the world”.

Yoshihide Suga, the chief cabinet secretary, defended the Taiji hunts, describing them as “a sustainable fishing [method] under appropriate control by the government with scientific foundations, and carried out carefully so that dolphins are not hurt”.

The capture of dolphins is said to have doubled in the past 10 years. A fully trained dolphin on public display can be worth more than $100,000 (£62,000), compared with as little as $100 if butchered for meat. Anti-hunt campaigners say the market for captured dolphins in China is growing rapidly.

Over the past five years, observers say, more than 5,000 dolphins have been killed at Taiji, with a further 750 captured for aquariums.

Back to News
comments powered by Disqus
News category
News archives
Filter past entries by month/year
Latest media releases
View media releases
We use cookies on this site to enhance your experience, anyalyse site usage and assist our marketing efforts. By continuing to browse or by clicking 'Accept Cookies' you agree to the storing of first and third party cookies on your device. Privacy Policy Cookie Settings